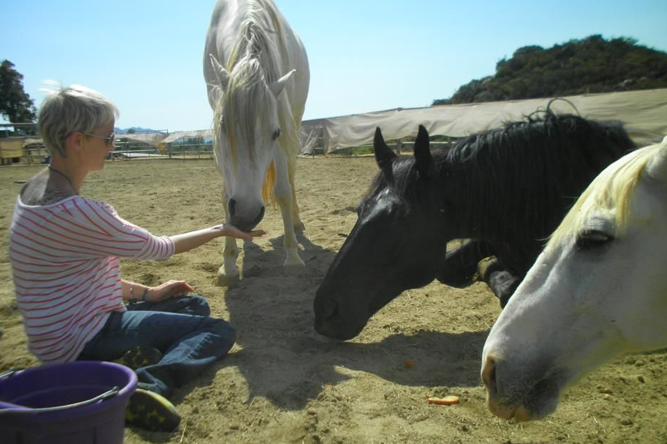 Pet hospice – what is that? Well apparently I was already doing it, or so it seemed. Harleigh was seven years, seven pounds and the most challenging Miniature Pinscher on the planet. He had a host of health issues that caused him to have a major spinal surgery and a chaotic recovery – if you could call him recovered.  I tried everything in the book and beyond, and was forever going from one practitioner to another in search of relief. And that was difficult, because Harleigh did not like people. He was an avid biter and looking back on his behavior now, if he was a human, he might have been classified as autistic. That’s my take on it, and it fit him, because everyday was a brand new day for him. Suffice to say, when he passed with pet euthanasia, I died too. The person I was in the world, the person who took care of him, who loved him, who adored him, who had his tiny, whittle back – she died that day too, just nobody really noticed.

I flopped around the world for week waiting for his ashes to return as I chose pet cremation, quit my job, ended a relationship and retreated with my Chihuahua Juno, away from the world into writing another book. Still I was broken. It was a private breakage. I didn’t know how to pull myself back, so I kept him in the freezer for months. I too was frozen. Until one day I remembered a lady I had met some time back, when I was with Harleigh at one of our many appointments, visiting a chiropractor who could not touch him.  Priceless.

That day as we waited to be seen, he sat like a furry, brown apostrophe on the chair next to me, me feeding him treats, having his complete attention (ok, I always had that), a woman across the room looked at me and said, “you two have got something, don’t ya?” I looked up at her and smiled. “Yes, yes we do”.  She continued to chat for a bit saying what she did for a living.  Apparently she was an animal behaviorist, helping people enrich their bond with their animals, through therapy and education. She said, few people had what we had, very few. My heart burnt against the flesh that was now so tightly wrapped around it, because that’s what parenting does – it swells the heart to it’s max capacity and then some, searing the flesh that binds it. The kind lady wrote her name down on a piece of paper and said, “if you ever need anything, call me.” “Ok,” I said, not knowing what she meant, but complying all the same, while feeling something otherworldly cocoon itself around us all.

Now, here I was, remembering what she had said, rummaging around for the piece of paper, which I had in my desk drawer that was littered with post-it notes and card referrals for veterinary professionals and looked her up. I sat at my computer astonished. She was the horse trainer for Shadowfax, the beautiful white horse from Lord of The Rings and she was in high demand as an animal behaviorist. Wow! Who was I to call her and why would I and what would I say?  But that otherworldly something had me pick up the phone and dial.. She remembered me, God bless her, and Harleigh. I told her he had passed. A complete stranger was to be the first person I was to open up to about my pain. “Come out this Sunday to the Ranch,” she said. Again, I complied.

That Sunday it was beyond hot. The Ranch was packed back in the heart of Escondido, but the drive was lovely regardless. When I got there Cynthia and her friend met and brought me up to the house. Conversation was little, like Harleigh, which I appreciated. In their house was a huge bowl of freshly cut veggies and fruits for the horses. “Lets go down to the paddock and meet the horses,” said Cynthia and so we did.

I followed Cynthia and her partner down to the lower paddock where three majestic beasts awaited our arrival. My organs went into a fixed and locked position. I was terrified. Not because they were horses and I had no experience with them. No, I was terrified because I knew that otherworldly something was about to take hold of the moment and any resistance was futile. I was Irish, a woman and a Scorpio – this was not going to be easy.

As we walked into the paddock, I could see Shadowfax, another white horse and one gorgeous black one start to make their way towards us, sniffing out imposters (which I truly felt I was) along the way. The food was definitely what they were interested in and this lady in blue jeans.

Cynthia said, “sit down”, so I did and what happened next defies explanation. One by one the horses encircled me and sat down on the ground with me, with more grace than one might imagine. Their bodies hit the ground like equine marshmallows. fluffing out a benevolent cloud of soft dirt. In reverence we began to feed them and just as the bowl was almost emptied I turned around and Cynthia and her friend were gone. I realized I was now totally and completely alone with these beasts, as my heart began to break into a thousand and one Harleigh pieces that dropped to the dirt, like filthy blessings. Tears began to fall down my face, saturating the illusion of separation but acknowledging the humaneness of bereavement all the same. It was as though everything was just showing up to be loved.

I don’t know how long we sat there but the energy of those horses didn’t move out and away. It moved in and through me and never left. People talk about horse experiences, but they are just words until you are there with them, alone, unprepared, vulnerable and broken. They don’t fix you. They prop you up until you can get back on the back of life again, until you can come back to the new version of you. This is the journey of pet grief and pet loss.

I never saw Cynthia again. My meeting her was a God thing. Those horses knew what I was, not who I was. In mere moments they stripped away the walls I had built to sorrow and pain and they were gone. The experience left me naked in a world that has to touch you, it just has to. And when it does, and it you are lucky enough, go be with a horse or three. Throw away words, cast aside explanations, and discard anything that has come before and let them take you – not away – but to the center of yourself, the place where nobody has died, nothing has ever been lost and everything, every blessed thing remains.